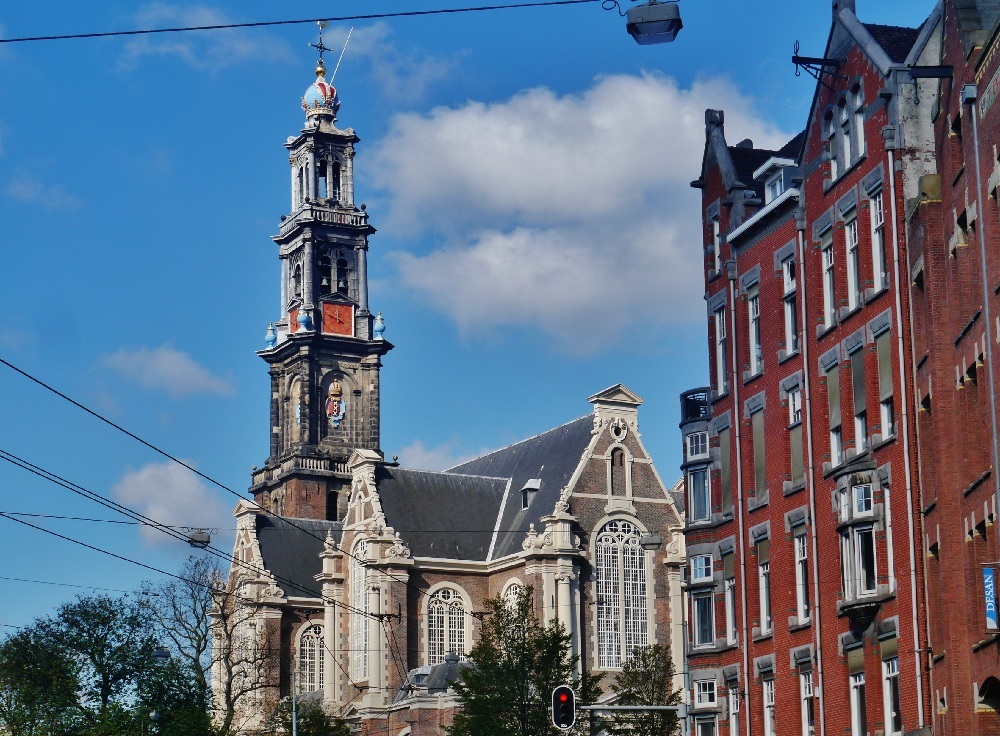 The Westerkerk is the first church in Amsterdam that began from the ground up as a Protestant Church. Many Protestant churches started off as Catholic churches, and then were converted. Sunday morning services are held in the church every week, at 10:30 AM.

At 85 metres (275 feet), the iconic Westertoren is the highest structure in the heart of Amsterdam. It is topped by the imperial crown of Maximilian I, who appreciated the support he received from Amsterdam during the Hook and Cod wars.

3. Rembrandt van Rijn is buried in the Westerkerk.

It is not clear where exactly the famous Dutch painter is buried because he died in poverty, and was buried in an unmarked grave. It is believed that his resting place is along the North wall of the church.

4. The daily concert from the tower bells is a treat not to be missed

You do not have to be inside the tower or the church to hear the beautiful sounds of 42 bells played by university students, every Tuesday between noon and 1:00 PM. A carillon concert playing the Beatles? Or heavy metal? Indeed!

5. Guided tours of the tower are available between April and October

The Westerkerk is open to visitors throughout the year. The bell tower is closed to visitors during the winter. However, you can join a guided tour of the tower, from April till October, starting out every half an hour. Are you ready to enjoy the beautiful panoramic view of Amsterdam? All you need to do is climb the 180 steps up a spiral staircase, and engage with the very steep ladder at the end of your climb. It is well worth the effort!

6. Classical music concerts are held in the Westerkerk throughout the year

Many of the concerts in the church include its beautiful pipe organ, which has undergone many stages of development over the centuries. It is worth attending a concert here, just so that you can appreciate the excellent acoustics of the interior of the church.

7. The Westerkerk is in close proximity to Anne Frank’s House

Anne wrote in her diary about the soothing music of the church bells, which she listened to while in hiding. She particularly appreciated hearing the hourly tones of the bells at night.

8. The Westerkerk is adjacent to the Jordaan district and the Westermarkt

During the high season, it is advisable to reserve a tour of the tower ahead of time. If you need to occupy yourself while waiting, spend some time in the Jordaan district, including the Westermarkt. Admire or acquire some of the up-market clothing that has made the area famous. When you return to the tower before your tour, you can store your shopping bags in a special location set aside for this purpose.

9. The Westerkerk is located on the Prinsengracht at number 279

The Westerkerk and bell tower can be reached by bus or tram. Take the 170 or the 172 bus from Centraal Station, or the 13 or 17 tram line. Alternatively, don your walking shoes and spend a mere 20 minutes walking to your destination from the station.