What is a hotel room with a kitchen called? 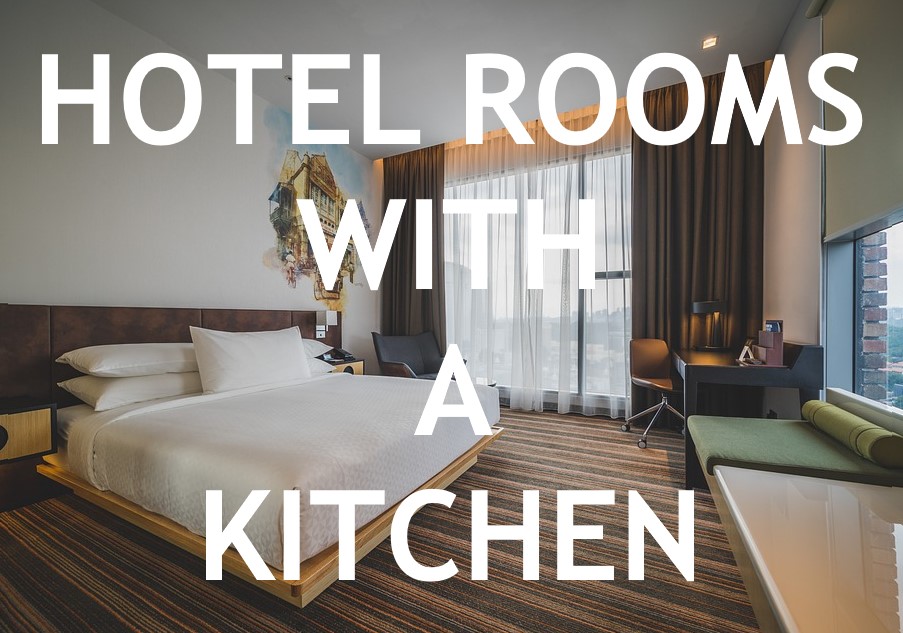 A hotel room with a kitchen area is handy for longer stays. They provide comforts from home for family, groups, business travellers, and other guests looking to make their own meals.

A hotel room might feature a fully equipped kitchen. These are typically known as rooms with a full kitchen. Full kitchens include a sink, stove, refrigerator and freezer, and microwave. They generally include cookware, silverware, and basic cooking utensils. They might also feature supplies, such as cleaning products and paper towels.

Some rooms feature kitchenettes. These are usually smaller rooms with a kitchen area that has essentials. Common equipment includes a microwave, toaster oven, small fridge, and a hot plate. Most do not have a regular oven or stovetop.

Names for hotel rooms with a kitchen

Extended stay hotels often feature rooms with kitchens. These rooms are convenient for guests who do not want to eat out every day, especially if they are staying for several days or weeks. Rooms with kitchens are known by different names depending on what is offered and the property.

While not common, some guestrooms feature kitchenettes. These typically have basic equipment such as a small refrigerator, microwave, coffeemaker, and sink. They might also include a hot plate.

Rooms with kitchens are typically called suites, although not all suites feature kitchens. These rooms typically include a sitting area or living room depending on the size. They might be studio suites with an open plan layout that includes shared sleeping and living space. Other rooms like junior, standard or executive suites generally have separate bedrooms. Kitchen facilities in suites vary from kitchenettes to full kitchens.

Apartment hotels or aparthotels usually feature apartments with kitchens. These rooms are typically larger than regular hotel guestrooms or suites. They often have dedicated living rooms, bedrooms and kitchens. They also usually have laundry machines. Guests can often expect well-equipped kitchen facilities with full-sized appliances plus utensils, cookware, kitchen supplies and other essentials.

Some hotels refer to rooms with kitchens as a residence. Although like an apartment, they are generally smaller. They feature similar amenities including one or more bedrooms, a living space and kitchen. The kitchen is typically fully equipped with full-sized appliances and essentials to cook meals in your room.

Is Booking.com a travel agent?

A travel agent provides everything you need to book your holiday or business trip. Services include different types of accommodation in a range of ...
Read More
Travelling Europe

What is Booking.com Wallet?

Booking.com have a generous loyalty scheme that allows you to earn rewards. To earn a reward, you simply have to complete the reservation you ...
Read More
Travelling Europe

What is a hotel room with two bedrooms called?

These two popular airlines have now formed a partnership. As a passenger you should benefit from streamlined schedules between them. There'll even be more ...
Read More
Travelling Europe

Everyone desires to have a comfortable flight to their respective destinations. Most people would prefer an aeroplane with all the fancy things like Wi-Fi, ...
Read More
Travelling Europe

When booking a flight in the economy class, you would like to have some bit of comfort during the entire period. What is better ...
Read More
Travelling Europe

Like most other people, you also want value for money when it comes to flying. If you’re taking a long trip, comfort, the food ...
Read More
Travelling Europe

During the fall and winter months, a pretty white blanket falls over much of Europe. Are you going to book it or has it ...
Read More
Travelling Europe

Is Transavia part of Flying Blue?

Offering regular and charter flights, Transavia is a low-cost airline based in the Netherlands. The airline operates primarily to destinations in Europe and around ...
Read More
Travelling Europe

Several low-cost carriers operate flights to and from cities in the Netherlands. These include major airlines from Europe as well as Israel, Turkey and ...
Read More
Travelling Europe

Is Vueling a good airline?

Vueling Airlines is the largest airline in Spain in terms of fleet size and number of destinations, the carrier is based in Greater Barcelona.     About ...
Read More