Air France vs Lufthansa – Which is better? 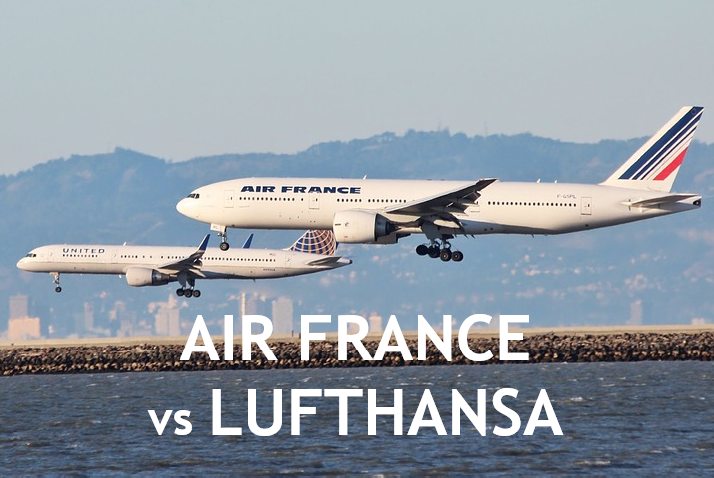 Air France is a popular airline, which was formed in 1933. Over the years, it has gained a good reputation due to the quality of its airport, products offered onboard, and services. It is based in Paris Charles de Gaulle and operates in several regions globally, including North America, South America, Asia, and Africa. Air France is a founding member of SkyTeam, and in 2004 it partnered with KLM to become the France-KLM Group.

On the other hand, Lufthansa is the biggest German airline and oldest in Europe. It is famous as it is rated highly as one of the best European airlines. This German airline has also partnered with other airlines and operates worldwide.

Nonetheless, one may need to compare both to see which one suits them best. Let’s look at each airline separately to find out more about them.

Advantages and Disadvantages of Air France and Lufthansa

Both airlines are great and have gained popularity over the years as one of the industry’s largest competitors. However, they have advantages and limitations, especially in terms of their services and classes.

What are the Major Differences Between Air France and Lufthansa?

We have looked briefly at both airlines’ pros and cons, but that is not where the differences lie. Here are the main differences between Air France and Lufthansa;

Seats at Lufthansa are way more comfortable and spacious when comparing it with that of Air France.

Lufthansa has a good reputation for keeping time, while Air France is slow with luggage issues and it can be very crowded.

Lufthansa has fewer entertainment options as compared to Air France. In AF, you can select plenty of movies and TV shows.

Air France has a fantastic business section, but you can somehow fail to note the difference between economy and business class when it comes to Lufthansa. On the other hand, the economy section of AF is well-upgraded but not very comfortable, whereas Lufthansa has a great economy class.

Air France airline has an extensive menu with great selections. You can order soup, salmon, shrimp, etc. While on Lufthansa, they have economy class passengers receive the same meal with limited selection.

Air France will be the perfect airline if you like great entertainment options as well as awesome dishes on your flight. It also has a great seating area, which will allow you to arrange your items the way you want. Business-class passengers also get the best priorities, such as luggage access.

If you are in a hurry, this airline is best for you since their services are fast and efficient as they ensure passengers do not wait too long in the security check area. When you also choose to use Lufthansa, you will not necessarily have to pay for business class because the economy class is also comfortable.

Transavia is an established low-cost airline based at Amsterdam Airport Schiphol in the Netherlands. The carrier serves mainly leisure destinations in Europe, Africa and ...
Read More
Travelling to Amsterdam

Turkish Airlines or Qatar Airways – Which is better?

Both airlines operate flights to approximately three hundred destinations around the world. You can fly in first class with Qatar Airways, but Turkish Airlines ...
Read More
Travelling to Amsterdam

How much time does it take to fly from Salt Lake City to Amsterdam?

Approximately two-thirds of the seats in KLM's daily flights are in Economy and Economy Comfort. They are the two lowest categories. The difference between ...
Read More
Travelling to Amsterdam

How many hours is a flight from Seattle to Amsterdam?

The first flights between Seattle-Tacoma International Airport (SEA) and Europe were offered by Pan Am. Starting in 1961, the airline operated non-stop flights to ...
Read More
Travelling to Amsterdam

With its Headquarters in Atlanta, Georgia, Delta Airlines is one of the major airlines in the USA. The airline operates over 5400 flights on ...
Read More
Travelling to Amsterdam

British Airways and Virgin Atlantic are the United Kingdom’s leading airlines. Both airlines offer similar products, although there is one significant difference. Comparing inflight ...
Read More
Travelling to Amsterdam

What is the legroom on Cathay Pacific Economy?

Founded in 1946, Cathay Pacific has a rich history that sees it serve more than ninety destinations spread across thirty-five countries. The countries it ...
Read More
Travelling to Amsterdam

What is the total flight time from Portland to Amsterdam?

The first international from Portland International Airport was a flight to Vancouver in 1967. Flights to Asia soon followed. Non-stop service between Portland and ...
Read More
Travelling to Amsterdam

How many hours is the flight time from Capetown to Amsterdam?

What is the flight time from Johannesburg to the Netherlands?

A flight from Johannesburg in South Africa to the Netherlands is approximately 8,992 kilometres or 5,587 miles. The shortest flight time is eleven hours ...
Read More
Travelling to Amsterdam

What is the flight time to the Netherlands from India?

Many international airlines offer flights from India to the Netherlands. The distance between the two countries is 6,964 kilometres or 4,327 miles. There are ...
Read More