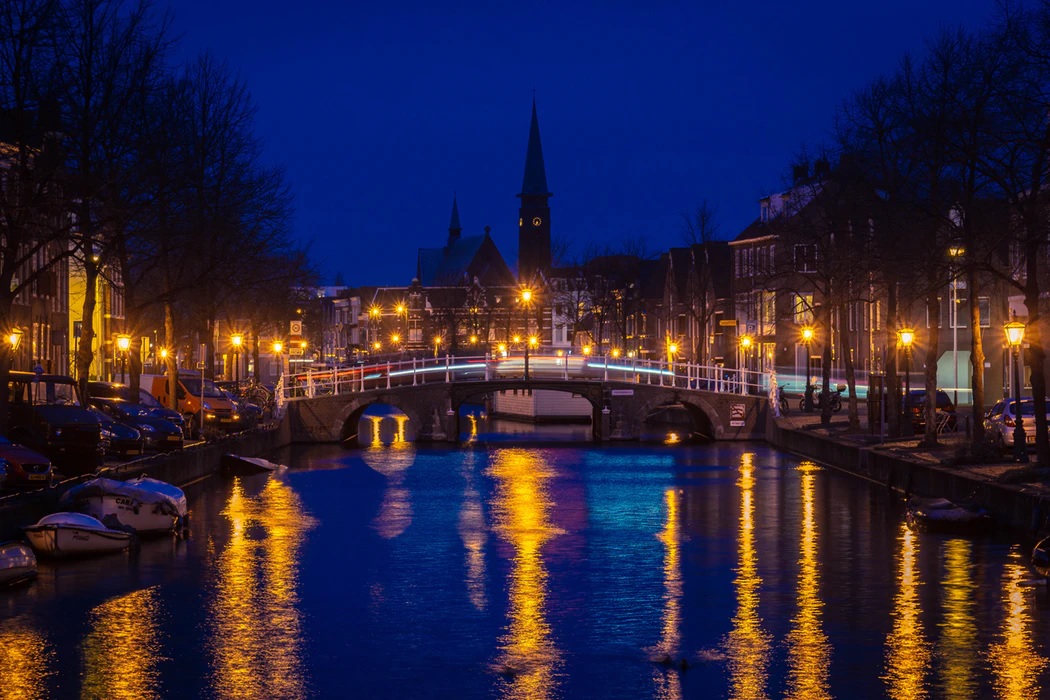 Whatever sparks your interest in Amsterdam, can also found in Leiden—art and architecture, discoveries and dining, or windmills and waterways. Take a 35-minute car or train journey, heading south-west out of Amsterdam, and treat yourself to a visit to the delightful city, without the crowds! And this five-minute read does not begin to cover it all!

Art and architecture in Leiden

Rembrandt Harmenszoon van Rijn was born in Leiden in 1606, and spent his younger years in this beautiful city. To follow his developing talents, view a remarkable seven-minute free video at the Young Rembrandt Studio on Langebrug 89.

Leiden is a city where you literally inhale the architecture. Just stroll around and discover for yourself the influence of history on academia and architecture. The historical building style, some of it going back 800 years, is reminiscent of the tall and narrow style of Amsterdam. The picturesque buildings include almshouses, churches, the Morspoort and the Zijlpoort city gates, and the many monuments to history in downtown Leiden. Look for the Leiden coat of arms, representing two keys crossing each other.

Discoveries and dining in Leiden

It is worth visiting Leiden just for its unique science museum. The Rijksmuseum Boerhaave will lead you through discoveries in anatomy, mathematics, electricity, sickness and health, and more. Named after Herman Boerhaave, a scientist who wore many hats during his tenure at Leiden University—the oldest university in the Netherlands.

Hungry now? Go to Maarsmansteeg 10A, where management of the Happy Tosti strives to do its best, using organic products, not wasting food, and best of all, hiring staff with disabilities. Alternatively, if you need a quick break for coffee while enjoying the historical architecture of Leiden Centre, step into the Koffiehuis for a smoked salmon sandwich and Yanaloma espresso.

Visiting the windmills and waterways in Leiden

Wandering what to do on a windy day in Leiden? Visit the windmills. The De Valk (Falcon) is the last reminder of 19 mills that were originally built on the city walls. The De Put may have been operated by Rembrandt’s father. And for a really informative look back at the history of milling, visit the Heesterboom.

Without an historical market square, all Leiden’s marketing used to take place along the many canals, and on the Oude Rijn river. As in Amsterdam, you can view many sites from the canals and river, but watch out for the low-lying bridges crossing the canals! Bootjes en Broodjes will take you on a guided tour, or you can rent a boat from them. They also offer tours with a meal – that’s where the “Broodjes” enter the picture!

If you are visiting visiting Leiden, here might be some other fantastic and fun things to do for you.