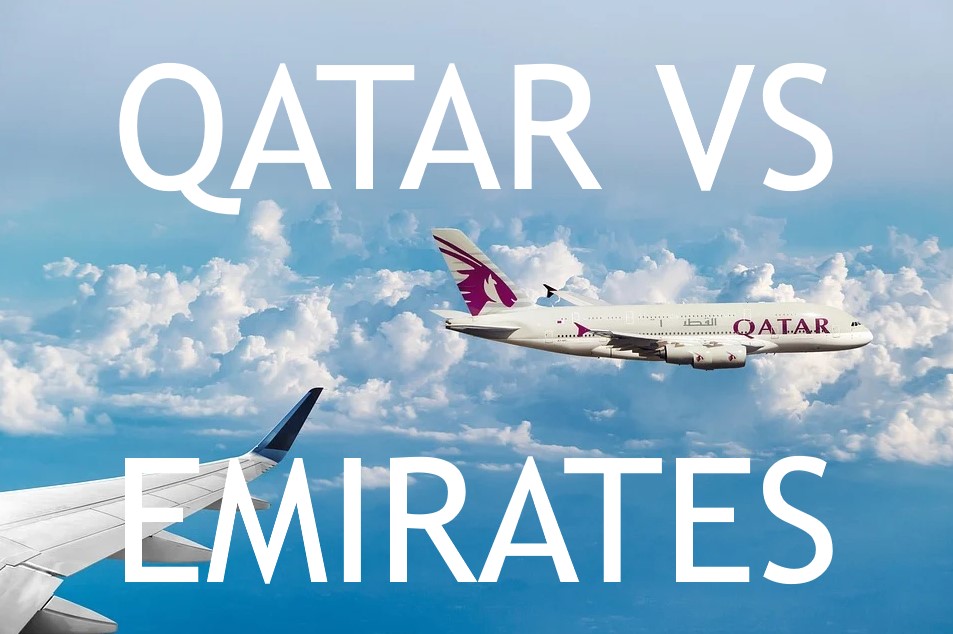 Emirates and Qatar Airways are two of the world’s best airlines. Comparing their inflight services, networks, and industry reputations helps us clearly see which airline has the edge.

Emirates First Class on its Airbus A380 aircraft feature doors, letting you escape with ultimate privacy. Fine dining is available at any time during the flight. Plus, there is a shower spa and lounge bar. On Boeing 777 aircraft, First Class suites feature virtual windows and soft leather seats. All seats transform into lie-flat beds. Qatar Airways’ spacious First Class offers superior privacy and comfort. Seats are designed to serve as a comfortable workspace and they transform into fully lie-flat beds. World-renowned chefs have designed the cabin’s menu, plus there is a caviar service and artisan bread. Designer lounge wear and luxurious amenity kits are also provided.

Based at Dubai International Airport, Emirates is the Middle East’s largest airline. It normally operates flights to more than 150 destinations in over 80 countries. The airline’s network spans six continents.

Qatar Airways flies to over 130 destinations on six continents. The airline is a member of the One World alliance, which provides customers with hundreds of additional destinations through codeshare flights.

Extra tip: Be sure no to miss out on this website for your best and cheapest flight.

Emirates is recognised as a 4-Star Airline by Skytrax, a leader in reviewing airlines. Qatar Airways is certified as a 5-Star Airline, one of the first airlines to receive the honour. Skytrax notes Qatar Airways’ leadership in delivering high standards of service and products. Seating, amenities, food, and cabin staff are among the industry’s best. Skytrax also ranks Qatar’s hub at Hamad International Airport in Doha as a 5-Star Airport.

Qatar Airways vs Emirates – The verdict

Emirates and Qatar Airways offer extensive route networks and superior inflight experiences. What separates these two leading Middle Eastern airlines is industry recognition. While both have strong reputations, Qatar has the edge. The airline has some of the highest quality products and services available in the industry.

By the way: If you are going travel, here might be some fantastic and fun deals for you.

Check out other best booking sites for cheapest and best hotels and flights.