The famous brown cafes of Amsterdam 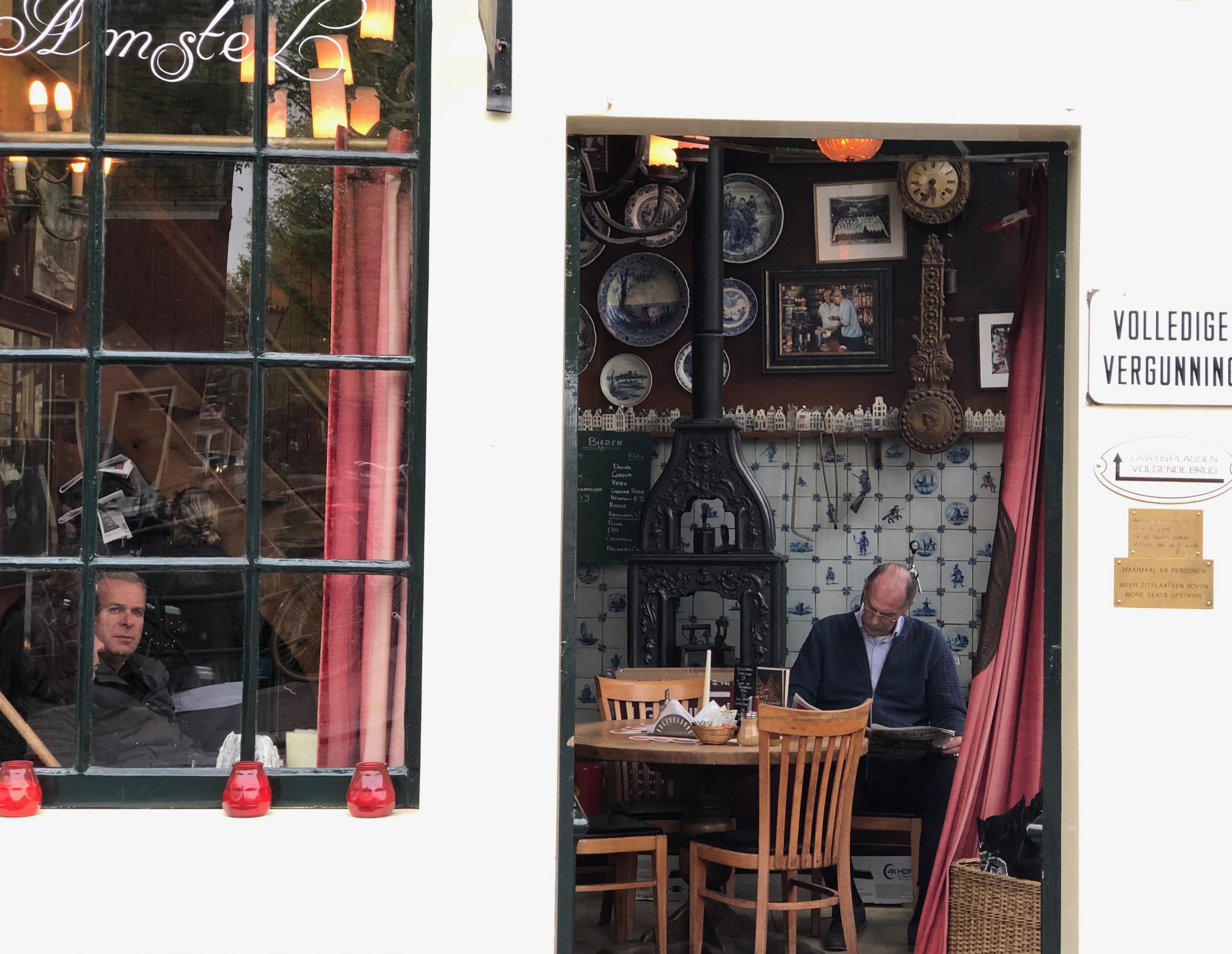 Let’s take a peek at some of Amsterdam’s famous brown cafés, better known as bruine cafés or bruine kroegen (brown pubs). One word easily describes Amsterdam’s brown cafés—gezelligheid, which, for the most part, translates into, cosiness. The typical dark wood panelling that has evolved over time due to cigarette smoke (some say), as well as the authentic Dutch food, drinks, and general ambiance, complete the picture of a brown café in Amsterdam.

Café Hoppe is one of the oldest brown cafés in Amsterdam, and as you’ve probably guessed, brown cafés and bars are by definition, old. Situated in central Amsterdam’s Spui square since 1670, you’d be well-advised to pop in to the Hoppe when you need a break from your book browsing in this famous square. Just the fact that Freddy Heineken was a regular patron of Café Hoppe, ought to tell you something about the quality of the brews. And if you are a morning person, try their light, but delicious breakfasts, served from 8:00 AM till 12:00 PM.

While we’re still back in the 17th century, let’s take a look at Café Chris, which, by starting to serve drinks to construction workers in 1624, qualifies it as the oldest brown café in the Jordaan district. Rembrandt lived out his final years in this neighbourhood. In fact, the construction workers who built the Westerkerk where he is buried, were paid in a rather unusual currency, beer! Enjoy a game of pool with your beer, in the warmth of a deep brown mahogany setting.

Are you looking for a light-coloured pilsner? How about an ale? You’ll find it at the Proeflokaal Arendsnest. All the beers that are served at this brown bar located in the Herengracht, are brewed in the Netherlands. Connoisseurs will tell you that there are 400 different beers brewed in Holland! Do you enjoy beer tasting events? Then visit the Arendsnest on a Monday, Friday, or Saturday. You’ll be in for a treat that surpasses the taste of the beer. The staff are so knowledgeable about their craft, you will recognise them as quintessential “beerologists”! If you are an eager listener, they will be happy to share their knowledge.

This quaint little brown café surely defines the meaning of the word, cosy. As authentic as it can be with a fireplace and comfortable armchairs upstairs, you may find that that this Café, on a corner of Wetering Street, attracts a different kind of clientele. Its quiet atmosphere suits an intellectual, literary crowd, but if you hungry or thirsty, your needs will be met. A small bar downstairs may surprise you with its unique selection of satisfying beers.

The Café In’t Aepjen (In the Monkeys) boasts an “exotic” history. It is located at the old Sea Dyke, in one of the two remaining wooden buildings that survived the fire of 1452. For many years, the Old City was frequented by sailors who were unable to pay for their food and lodging. However, the proprietor of the pub was happy to accept payments with the exotic animals the sailors picked up on their voyages. Especially monkeys! Today you can enjoy a great Jenever, or a house beer, while admiring the monkey decor surrounding you. And you can pay in Euro Dollars!

Although De Twee Zwaantjes (Two Swans) dates back to the early twentieth century, it acquired new owners in 2007. They brought with them their warm hospitality, matching the ambiance of this popular brown pub. If you love music, disco, and karaoke, come in and simply ask for the microphone. You’ll be the star of the show, entertaining the rest of the patrons while they enjoy their sandwiches, snacks, and Trappist beer, brewed by one of the two monasteries in the Netherlands that know how to brew this beer.

The name of this charming pub located in De Pijp, Amsterdam’s Latin Quarter, defines the quintessential brown café. Appropriately named the “Birch Wood” café, the warm atmosphere provided by its beautiful wood interior draws both visitors and local residents to the bar. The fact that Café Berkhout is strategically positioned opposite the old Heineken Brewery, adds to its charm. This pub’s delightful antique façade is not all it has to offer – the interesting menu choices and draft beer will surely satisfy!

If you’re a little on the tall side, be careful when you stand up inside Café Pieper. Located on the Prinsengracht, over the canal, it is particularly tiny. And it is old. But “good” old. This brown café dates back to 1665, and despite its small dimensions, it oozes atmosphere – and beer. In addition to the typical interior décor of a brown café, its stained-glass windows, and an antique Belgian pump, add to the cosy feel of this café.

Described on its website as “one of the last oases of good taste in the neighborhood of Leidseplein”, the Café de Spuyt opened its doors in 1968. It has always been a meeting place for an eclectic group of patrons. Students, local residents, tourists, and even a group of squatters, have felt comfortable in this brown pub. It’s no wonder! With six taps, approximately 100 beers to choose from, and an engaging staff, who can resist this cosy little pub?

The De Blauwe Parade is where it all began. Heineken, that is. Gerard Adriaan Heineken purchased the brewery (with the help of his kind Mom) in 1864, but the Parade opened 180 years before he arrived on the scene. After hand-changing, and name-changing, the bar today has matured into a sophisticated brown pub with an excellent selection of beer and liquor, as well as cuisine. Don’t miss the Jenever served with traditional Bitterballen. And last, but not least, admire the beautiful original blue Delft tiles around the walls.

The Nine Little Streets (De 9 Straatjes) is home to the Café de Pels, which will start your day with a choice of croissants or a hearty Dutch breakfast. Famous for the Pels Wall of art, to which you’re are welcome to contribute your own creations, perhaps this is why this brown café also attracts contributors to the world of literature and journalism. What’s on the menu? Breakfast, lunch, snacks, chocolate, and an abundance of newspapers, magazines, and books, including de Pels publications!

The Beems family has been running the Café de Dokter, for six generations! Why is this tiny, 18 square metre brown pub named De Dokter? Because its doors were opened by a surgeon in 1798, to feed the hungry medical students at the hospital situated virtually on its doorstep. Matching the dark wood of the interior, the many antiquities you’ll find in this small space keep de Dokter in the late 18th century. However, the jazz, the whiskey, and the snacks are unsurpassed 21st century vintage.

15 most popular tours of Amsterdam

There is no shortage of tours you can join in beautiful Amsterdam. This makes it more difficult to choose any one or two from ...
Read More
Happening in Amsterdam

As a city known for innovation and creativity, Amsterdam really provides the perfect shopping experience. Trust us, this creativity flows through all the stores ...
Read More
Happening in Amsterdam

Venustempel Sexmuseum, also popularly known as the Temple of Venus, is the oldest and first sex museum worldwide situated in the center of Amsterdam. ...
Read More
Happening in Amsterdam

The Rijksmuseum in Amsterdam is the national museum of the Netherlands. A world class museum, its collections are housed in an impressive building built ...
Read More
Happening in Amsterdam

The Van Gogh museum in Amsterdam

The first thing that comes to many people’s minds when they hear the name van Gogh is artwork and paintings. Some people will also ...
Read More
Happening in Amsterdam

The Madame Tussauds is a world renowned wax museum located in the Dutch capital, Amsterdam. Founded in the 1970s, the wax museum is located ...
Read More
Happening in Amsterdam

The 10 best clubs of Amsterdam

Nightlife in Amsterdam is epic, but it's risky to club on foreign turf as if you don't know what to expect. Clubs can rock ...
Read More
Happening in Amsterdam

Where and when are the markets in Amsterdam?

The Markets of Amsterdam: Where are they, and When are they Open? The city of Amsterdam boasts more than 30 markets, which together, can ...
Read More
Happening in Amsterdam

Is Boom Chicago Amsterdam worth visiting?

Amsterdam is a beautiful city, and there are so many things to do and have fun. An excellent way to start a fun night ...
Read More
Happening in Amsterdam

Ruigoord is a creative village within the Amsterdam municipality, located in Houtrakpolder in Dutch province, North-Holland. It is a small village, which until the ...
Read More
Happening in Amsterdam

If you’re planning to visit Amsterdam, you cannot get a full experience unless you try a canal cruise. There are many canal cruises available ...
Read More
Happening in Amsterdam

The Artis Zoo in Amsterdam houses 750 species of creatures, including giraffes, zebras, chimpanzees, and elephants in transplanted natural habitations. The Artis was initiated ...
Read More