Is Vueling a good airline? 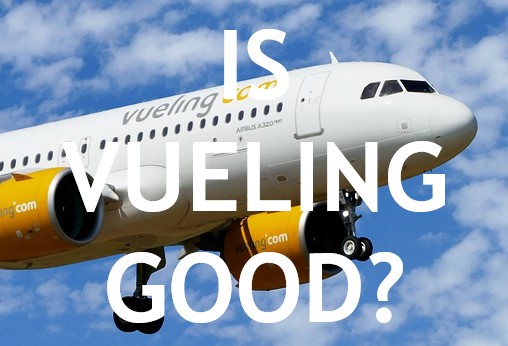 Vueling Airlines is the largest airline in Spain in terms of fleet size and number of destinations, the carrier is based in Greater Barcelona.

Vueling’s name combines the Spanish word for flight (vuelo) and the English gerund suffix -ing. Founded in 2004, the airline commended operations with a flight between Barcelona and Ibiza. The low-cost carrier began with a fleet of just two Airbus A320 based in Barcelona. Its headquarters are in El Prat de Llobregat, Spain.

Vueling operates hubs at Barcelona-El Prat Airport and Rome-Fiumicino International Airport. The airline’s network includes more than 140 destinations in Africa, Asia, Europe and the Middle East. Vueling has a fleet of over 120 Airbus A319, A320, A321, A320neo and A321neo aircraft.

Vueling Airlines is certified as a 4-Star Low-Cost Airline by Skytrax, an industry leader in airline ratings and reviews. That means the airline is above average in terms of products and services at airports and onboard. In its assessment of Vueling, Skytrax noted that the airline is one of the better low-cost carriers in Europe. That is a result of its service quality, modern fleet and well-priced buy onboard menu. Cabin comfort is also fair with seats offering 29- to 30-inch pitch, while cabin crews are efficient.

What is a hotel room with a kitchen called?

A hotel room with a kitchen area is handy for longer stays. They provide comforts from home for family, groups, business travellers, and other ...
Read More
Travelling Europe

Is Booking.com a travel agent?

A travel agent provides everything you need to book your holiday or business trip. Services include different types of accommodation in a range of ...
Read More
Travelling Europe

What is Booking.com Wallet?

Booking.com have a generous loyalty scheme that allows you to earn rewards. To earn a reward, you simply have to complete the reservation you ...
Read More
Travelling Europe

What is a hotel room with two bedrooms called?

These two popular airlines have now formed a partnership. As a passenger you should benefit from streamlined schedules between them. There'll even be more ...
Read More
Travelling Europe

Everyone desires to have a comfortable flight to their respective destinations. Most people would prefer an aeroplane with all the fancy things like Wi-Fi, ...
Read More
Travelling Europe

When booking a flight in the economy class, you would like to have some bit of comfort during the entire period. What is better ...
Read More
Travelling Europe

Like most other people, you also want value for money when it comes to flying. If you’re taking a long trip, comfort, the food ...
Read More
Travelling Europe

During the fall and winter months, a pretty white blanket falls over much of Europe. Are you going to book it or has it ...
Read More
Travelling Europe

Is Transavia part of Flying Blue?

Offering regular and charter flights, Transavia is a low-cost airline based in the Netherlands. The airline operates primarily to destinations in Europe and around ...
Read More
Travelling Europe

Several low-cost carriers operate flights to and from cities in the Netherlands. These include major airlines from Europe as well as Israel, Turkey and ...
Read More