How long is the flight from Amsterdam to Chicago? 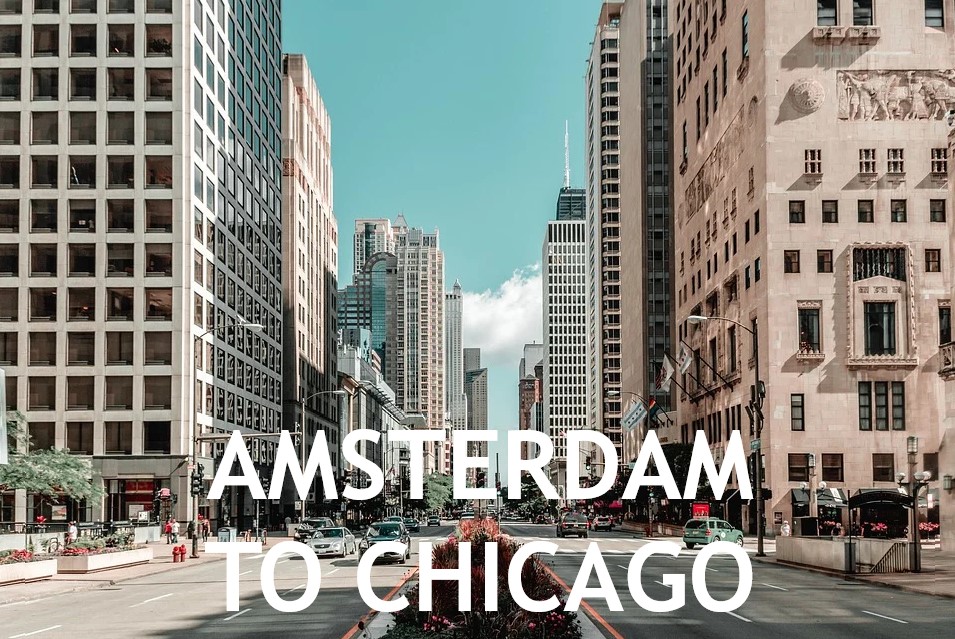 There are regular daily flights from Amsterdam Schiphol International Airport (AMS) to Chicago in the United States. The distance is 4,189 miles or 6,612 kilometres. A direct, non-stop flight takes around nine hours. If a flight involves a stopover, the travelling time is increased. The amount of time depends on where the scheduled stop occurs and how long it takes before the flight resumes its journey.

There are two international airports in the city. Chicago O’Hare (ORD) is the largest airport. It is located 18 miles or 29 kilometres from the central neighbourhood. Chicago Midway (MDW) is 12.5 miles or 20 kilometres from the city centre. Flights from Amsterdam to both of Chicago’s airports follow similar schedules. There are approximately fourteen major airlines offering a total of up to forty-four daily flights.

Many airlines flying from Amsterdam Schiphol follow schedules of morning and afternoon flights to Chicago. The earliest flight to Chicago leaves at approximately 8.15 am each day. The last departure takes place at around 4.35 pm. One of the main airlines bound for Chicago is Holland’s KLM. The airline operates scheduled, direct flights throughout the day to both Chicago airports.

Some of the most well-known airlines make regular flights to Chicago. Lufthansa, Austrian and Swiss Airlines arrive at O’Hare. They are joined by many other airlines including Emirates, Air Canada, Qatar and United Airlines of America. Air France and Delta operate regular flights to Midway. Most airlines such as Lufthansa and Delta offer one or two flights before or after noon. Air France is one of the busiest airlines with an average of five flights scheduled during the morning and two in the afternoon.

Icelandair operates at least seven indirect flights to Chicago every week. The stopover is in Iceland and usually adds around one hour to the length of the journey. British Airways offers up to three indirect flights each day between Amsterdam and Chicago. The stopover is usually at one of London’s international airports including Heathrow, Gatwick and Stansted. Aer Lingus makes at least two daily flights between Amsterdam and Chicago. The flight usually includes a stopover at Dublin Airport which adds around two hours to the journey.

These two massive international carriers are the main competitors in the international flight sector. The Middle Eastern long-haul experts Emirates are popular for their ...
Read More
Travelling from Amsterdam

Etihad Airways and Qatar Airways are two of the Middle East’s leading airlines. Both carriers deliver strong business class experiences, although one airline is ...
Read More
Travelling from Amsterdam

KLM Airlines   KLM Royal Dutch Airlines is a certified 4-star airline. The rating covers the airline’s quality of services, its airport, onboard product and staff ...
Read More
Travelling from Amsterdam

All KLM destinations in Brazil

KLM has an extensive network across South America, including Brazil. Daily flights connect the Netherlands and Brazil. With KLM Royal Dutch Airlines, travellers can ...
Read More
Travelling from Amsterdam

What is the legroom on long haul British Airways economy flights?

Flying for many hours while sitting in one position can result in your legs becoming stiff and cramped, making it difficult to stand up ...
Read More
Travelling from Amsterdam

How long is a flight from the Netherlands to South Africa?

How long is a flight from Amsterdam to Australia?

The distance from Amsterdam to Australia is approximately 16,600 kilometres or 10,330 miles. Nearly all the flights involve one or more stopovers. However, there ...
Read More