Direct KLM flights to US cities 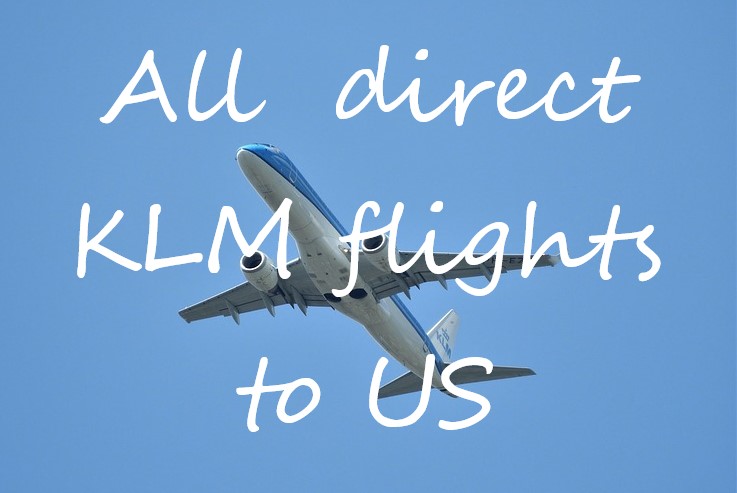 KLM is with no doubt, one of the leading airlines in the globe. The airline has attracted a lot of passengers from all its travel routes. USA Cities are among the leading routes. KLM, also known as the Royal Dutch Airlines, has its headquarters in Amsterdam Netherlands. It has a vast network of 70 international destinations and to 92 European cities. The USA is a key economic centre that attracts a lot of passengers booking to travel from Amsterdam to major cities in the Country. Below are some of the significant KLM flights from Amsterdam to the USA cities.

Flying from Amsterdam to Los Angeles

Being home to Hollywood, Los Angeles is the city of stars. Here you can visit luxury dinner places such as Beverly Hills. You can have fun surfing and sunbathing at the famous Venice Beach. Hollywood is the heart of the American movie industry, It attracts a lot of movie fan tourists every year. Los Angeles is also known for its luxurious restaurants and a variety of shops where you can spend a window shopping afternoon.

Everyone in the world has heard about this famous city. New York is full of great features and places such as the Statue of Liberty, the Museum of Modern Art, The Guggenheim and the Times Square. This home to Wall Street city is always full of the hustle and bustle. It has principal corporate offices around every corner. Some of the fun activities you can do in New York include shopping in the fifth avenue and trying some of the area’s restaurants.

San Francisco is a culture and food leader in the USA . The city is said to have the largest number of restaurants per head compared to other cities. Fishing is a major activity in the area. Fish dishes are a major delicacy. Some of the fun activities in the area include beach activities and visiting fun areas such as the golden gate bridge and the Francisco renowned cable-car. Wine lovers can visit Napa valley to sample and also enjoy the countryside sceneries.

Flying directly from Amsterdam to Boston

Boston is home to Harvard University and one of the oldest cities in the USA. The architecture here is older compared to other cities. Most of the city is made up of picturesque streets. For historians, Boston has a lot of features that were very important in the American revolution history. Such sites include the Boston Common park which is the oldest park in the US. Faneuil Hall heard a lot of independence speeches.

Located on the banks of Lake Michigan, Chicago is the city of jazz and skyscrapers. Jazz is a big thing in Chicago, given that jazz venues are all over the city. Visitors can enjoy the attractions such as the Lincoln Park Zoo, the Field Museum and the millennial park. Shoppers can go to Michigan Avenue, where there are a lot of luxurious stores, luxurious hotels and modern buildings worth admiring.

Flying from Amsterdam to Las Vegas

Las Vegas is all about the nightlife and Casino where you can enjoy spending your money. The area is full of high-end casinos and restaurants where you can enjoy world-class entertainment. Some of the must-visit places include the hotels of Las Vegas Boulevard and the golf courses if you are a golfer.

By the way: If you are flying to the US, here might be some fantastic and fun deals for you.