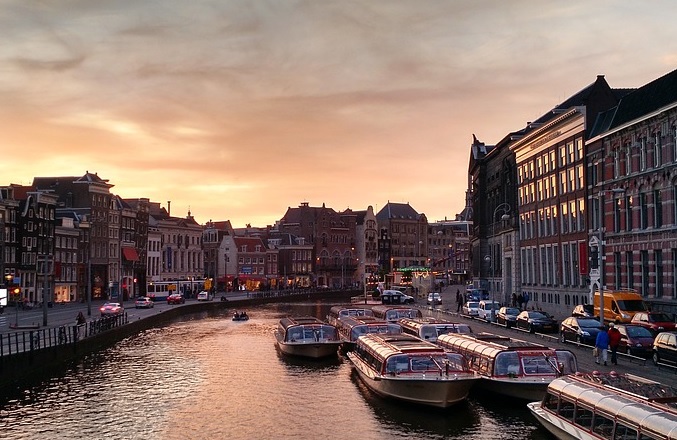 Amsterdam is home to some of the best hotels in the Netherlands, if not in Europe, which makes it impossible to describe all of them without losing count. However, there are a few hotels that are currently in the top three best hotels in the city center of Amsterdam. The Waldorf Astoria and Hotel TwentySeven are both in first place, the Luxury Suites are in second place and the Conservatorium Hotel, also known as the design hotel, is currently in third place.

Best hotel No. 1a – The Waldorf Astoria

First of all, it is the well known Waldorf Astoria that scored a whopping 9.6 superb guest rating since the beginning of 2019, which makes it the best hotel in Amsterdam at the moment. The hotel is located in the city center on the Herengracht and the building forms a collection of six canal palaces from the 17th century. The Waldorf Astoria is known for its excellent service, spacious rooms and the perfect location to explore the city. There are several famous sights within walking distance, such as the Rembrandt square, the Anne Frank House and the Royal Theater Carré.

Best hotel No. 1b – Hotel TwentySeven

Hotel TwentySeven, also known as one of the Small Luxury Hotels in Amsterdam, shares first place with the Waldorf Astoria with an equal 9.6 superb guest rating since the beginning of this year. The boutique hotel is located on the Dam Square, which is the heart of the city center. Because of the location, guests are within walking distance from bars, restaurants, the central station and numerous museums and shops. The hotel offers a range of personal services for guests to make their stay as pleasant as possible. Their great rating is mostly based on location, personal services, their Michelin star restaurant and exclusive looking suites.

The Luxury Suites, a member of Warwick Hotels, is rated a 9.4 by guests and currently holds second place in the list of best hotels in Amsterdam. The Luxury Suites is located in the Historical Museum, nearby the Dam Square and Amsterdam Central Station. One of the things that make this hotel so special is that there are 25 unique suites and penthouses with their own services. The rating is mostly based on the fact that no room is the same, their excellent service and the possibility to use a valet parking service that transfers you from the airport to the hotel.

Last but not least, the Conservatorium Hotel is currently in third place and scores a 9.3 guest rating since the beginning of this year. The Conservatorium Hotel is a luxurious five-star hotel and is located near the Rijksmuseum and the Van Gogh Museum. The hotel is also known as Amsterdam’s design hotel and it has been awarded best luxurious hotel in the Netherlands quite a few times. There are several restaurants in the hotel as well as a bar, a lounge and a Holistic Wellbeing center. The hotel scores high in service, personal arrangements for guests, its location and their design suites.

What is Booking.com Genius?

One of the most exciting loyalty schemes is Booking.com Genius. It's a reward programme that offers a variety of special offers and discounts. You ...
Read More
Staying in Amsterdam

When visiting Amsterdam, you can explore the city with day passes. These offers allow you to use public transport throughout your day. Whether you ...
Read More
Staying in Amsterdam

Is Booking.com a good site?

Booking.com is one of the most respected online travel agencies. It has been providing hotel booking services since 1996. Every day an average of ...
Read More
Staying in Amsterdam

What is a hotel room with a jacuzzi called?

A private hot tub is a great way to unwind during your hotel stay. Whether you are travelling on business or a holiday, an ...
Read More
Staying in Amsterdam

Which hotel is the best in Amsterdam?

Amsterdam is home to astonishing hotels. You will find some of the most luxurious hotels in Europe overlooking the city’s picturesque canals. Throughout Amsterdam, ...
Read More
Staying in Amsterdam

What size is a hotel king bed?

Hotel rooms offer a place to relax away from home. Whether travelling for leisure or business, you can choose from a range of room ...
Read More
Staying in Amsterdam

Which are the best hotels in Amsterdam airport?

Amsterdam Schiphol Airport is one of the best and biggest airports worldwide. It is the perfect airport for travelers since it is a very ...
Read More
Staying in Amsterdam

Visiting Amsterdam solo Amsterdam is an amazing city for solo travels. It is a city where you can get lost and be totally by yourself, ...
Read More
Staying in Amsterdam

What size is a hotel queen bed?

Whether you are travelling for work or leisure, your hotel room is your sanctuary. You might use the space to work, but more importantly ...
Read More
Staying in Amsterdam

Amsterdam is one of the most visited cities in Europe and across the globe. As a result, its hospitality industry continues to expand with ...
Read More
Staying in Amsterdam

Amsterdam is a thrillingly liberal, artistic city that has nevertheless retained its historic charm with beautiful canals and cobbled streets. However, costs can sore ...
Read More